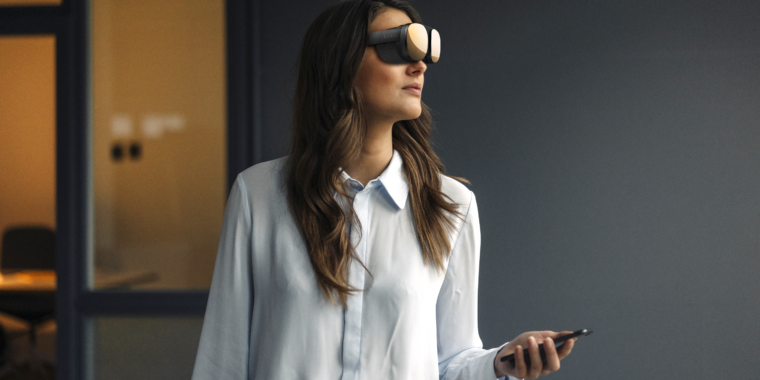 After a few ho-hum announcements earlier this year, HTC’s virtual reality division has returned with arguably its boldest (and most mysterious) product launch yet: the HTC Vive Flow.

The new headset, whose basic concept leaked on Tuesday via a massive Twitter image dump, will be available for preorder at some point today (perhaps right now, as this story goes live) for $499. Unlike HTC’s Vive Pro line, this new VR headset does not appear to prioritize gaming or other higher-fidelity use cases.

Instead, this all-in-one headset—whose massive, outward-facing lenses resemble something from a Venture Bros. henchman’s outfit—appears to have casual users in mind. Today’s announcement highlights apps that focus on “meditation,” “brain training,” and “collaborating and socializing,” and the latter example requires using HTC’s own Vive Sync virtual conferencing software. Additionally, promotional materials provided to Ars ahead of today’s reveal mention simple VR games for the platform, like Space Slurpies. (No, I never thought I’d type the words “space slurpies” in an Ars article, either.) The headset does not currently include any way to connect to gaming-grade computers, either wired or wireless, to run higher-fidelity VR experiences.

Instead, Vive Flow supports two types of Android smartphone connections. One requires a “5G” connection and HDCP 2.2, which are used to wirelessly mirror content from your phone to your virtual reality world. As of press time, this use case appears to hinge largely on video-streaming apps (even though Vive Flow’s built-in hardware appears perfectly capable of loading and presenting video). The other is a simpler Bluetooth connection, and this is required to turn an Android smartphone into a VR controller. HTC has yet to clarify how to use Vive Flow without a connected Android smartphone.

From the sound of Thursday’s announcement, Vive Flow includes enough onboard material to run VR experiences all by itself: a processing unit, a battery, built-in speakers, and some form of “inside-out” tracking, apparently powered by at least two outward-facing cameras (one beneath each of Vive Flow’s tinted, outward-facing lenses). However, the on-board battery is apparently so pesky that it can run out within minutes, thus all but requiring that you add an external battery pack for standard use. Users can connect their own Bluetooth audio headsets if they prefer those (but not any headset with a 3.5 mm headphone jack).

HTC sent a pretty basic description about Vive Flow to Ars Technica ahead of its formal Thursday reveal, including a few intriguing sales pitches. The best is the headset’s pair of “diopter adjustment” dials, which will allow users to fine-tune the focus of each eye independently. Additionally, the device’s hinge mechanism appears to adjust to a variety of head sizes and can neatly fold down for the sake of fitting into an attractively slim carrying case.

And while we suspect Vive Flow is an underpowered VR system (more on that in a second), HTC says it only weighs a paltry 189 grams, compared to 532 grams for Oculus Quest 2. Should you be willing to sacrifice power for comfort, the information we have thus far—along with video sequences that emphasize sweat-reducing airflow—looks optimistic on that front.